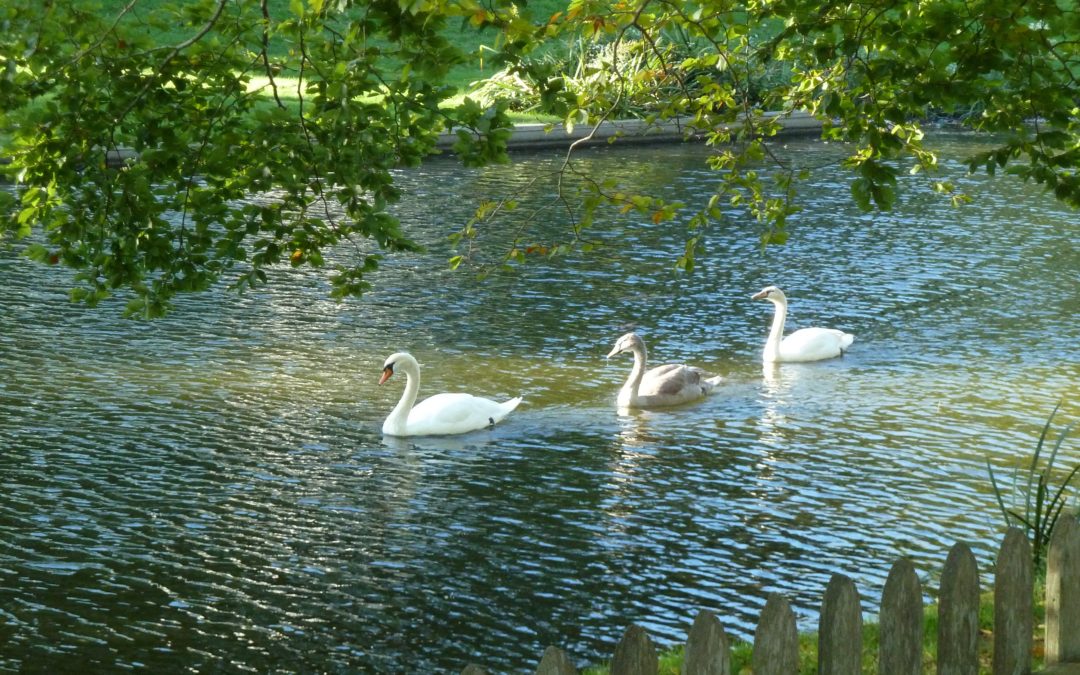 What is equanimity? My dictionary defines it as “the quality of being calm and even tempered,” and offers “composure” as a synonym. Another synonym is “poised.” Of course, it’s possible to appear composed and poised on the outside while being a nervous wreck on the inside – kind of like those swans in the photo, that we see glide across the pond, without being able to see whether they may be paddling furiously just below the surface.

Mindfulness-based courses teach equanimity, although it’s not always called out. Instead, we talk about being able to find “the space between stimulus and response.” Being the calm in the storm. Learning to “surf the urge” to act on cravings. Hitting the re-set button. The opposite of reactivity. Equanimity is all of this, and more. True equanimity is being calm and composed without effort.

One of the greatest benefits of regular meditation practice is learning how to not only regulate one’s temper, words, and actions (what’s on the surface) but also be able to calm and regulate one’s whole physiology (what’s underneath). This requires a signficant investment of practice time to experience, but offers amazing benefits to long-term health, well-being, and longevity.

A recent study looked at equanimity’s effect on loneliness. 153 adult volunteers who considered themselves stressed out were quizzed on their social networks, social interactions, and feelings of loneliness. They were then randomly divided into three groups and given an app for their phones. The control group’s app gave general stress management tips. The second group’s app taught mindfulness through awareness of breath and focus on the present moment. The third group’s app had the mindfulness plus additional instructions to recognize and allow all sensations.

After two weeks, “little changed for those in either the control group or the one taught attention-only mindfulness. But the subjects whose training included acceptance and equanimity [my emphasis] were measurably more sociable. . . . and their questionnaires showed a decline in their feelings of loneliness.” (Loneliness is Bad for Your Health. An App May Help)

Why would recognizing and allowing all sensations increase sociability and decrease loneliness? One of the study’s authors believes that teaching equanimity helps people “become less self-judgmental, less self-conscious, more amenable to interacting with others.”

Recognizing and allowing may sound familiar – they’re the first two steps of Tara Brach’s RAIN practice (the others are Investigate with kindness, and Nurture). That’s an equanimity practice.

An article in Mindful magazine describes a practice the author developed to help her be more kind when she’s on the phone with a customer service rep. As she listens to the hold music, she brings awareness to her breath, and reminds herself, “The person I am about to connect with has a body that experiences joy and pain, just like me. This is a person who has hopes, dreams, and fears, just like me.” (Practice with Customer Service Calls, April 2019 issue, p.22)

The “just like me” practice has a double benefit: directed outward, it generates more kindness and compassion toward others. At the same time it reflects back on oneself the recognition of one’s own humanity. While this is a compassion practice, it’s also an equanimity practice, because it recognizes and allows negative thoughts and emotions, while reducing reactivity.

Do you have an equanimity practice that you like? Is there something you already do that helps you find the space between stimulus and response? If so, I’d love to hear about it!